Digitalization, Industry 4.0, and their importance for product inspection

Digitalization and Industry 4.0 have been the most discussed topics in industry for a while. Despite this, there is currently no universally standardized communications protocol with which to quickly and simply connect system components from different manufacturers. The disadvantages of this status quo are clear: reporting on overall plant performance can only provide an incomplete picture, traceability (e.g. for audits) remains limited, and potential for improving uptime goes underutilized. As a remedy to these issues, OPC UA protocol has begun to establish itself as a the most likely candidate for a universal communications standard.

Sesotec is making an important contribution to alleviating these problems through the introduction of its INTERLINK modules. With INTERLINK, Sesotec metal detectors, metal separators, and X-ray inspection systems can be integrated into central control systems. By networking production systems to enable Industry 4.0 and IIoT (Industrial Internet of Things) capabilities, efficiency gains can be achieved.

Sesotec INTERLINK ensures the secure and efficient exchange of data via OPC UA, making it possible to perform central process analysis to drive a targeted increase in productivity. It enables monitoring and control capabilities within the existing company network. Using cross-device data comparison, INTERLINK is able to quickly detect errors and machine attrition. Security and audit compliance is ensured by the tamper-proof transmission of all data and user activities. Furthermore, Sesotec INTERLINK is specially equipped for compatibility with Sesotec’s digital services, including predictive maintenance, remote commissioning, and remote access.

A prerequisite for the use of INTERLINK is having integrated all relevant production equipment into a central ERP or PPS system. Another requirement is that the networked devices and systems allow for secure and simple data exchange.

Bartosch Jauernik, Product Manager Plastics at Sesotec, summarizes the advantages of INTERLINK: “A circular economy, sustainability, and digitalization are THE defining topics for German industrial companies. Increasing productivity and profitability are inextricable from these issues. Digitalized and automated production processes deliver valuable data that can only be analyzed with the use of safe, efficient, and compliant communications modules. In this sense, technologies such as Sesotec INTERLINK are of central importance.” 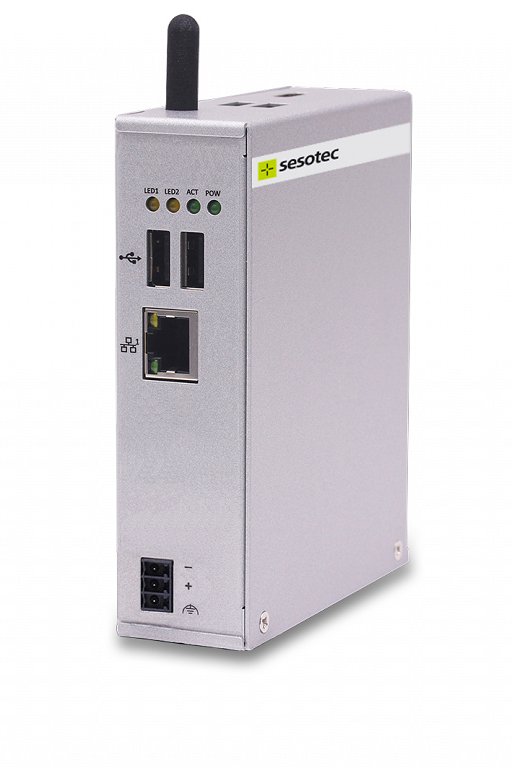 A small device with a big impact: The Sesotec INTERLINK module for plant networking enables efficiency gains on the level of Industry 4.0 and IIoT. (Image: Sesotec GmbH)