Minimal downtimes in the event of a fault

Drive and automation specialist Baumüller has extended its new SAF 002/003 safety modules of the b maXX 5000 converter series with a freely parameterizable delay time. The delay time is switched between a safety function and the associated error reaction Safe Torque Off (STO). This provides optimum protection for the machine mechanics against damage in the event of a fault and minimizes downtimes. Typically,

the safety modules are equipped with various safety functions that can be used for safe monitoring when required.

For example, if a limit value violation is detected during the safe monitoring of a speed, the system reacts by triggering the STO function, which switches the drive torque-free. However, in this case the motor may not come to a controlled standstill, which means it may coast down.

Baumüller has now developed an innovation for the SAF 002/003 safety modules: The parameterizable delay time is a time window, individually user-programmable depending on the safety function, which is switched between the safety functions and the STO function.

For example, if during active Safe Limited Speed (SLS) speed monitoring the previously parameterized speed is exceeded, the delay time is started. The safety module simultaneously sends a signal to the converter to perform a specific action. This action can be parameterized in advance; for example, the converter decelerates the drive in a controlled manner within the set time. Only when the machine has come to a standstill is the drive safely switched torque-free. 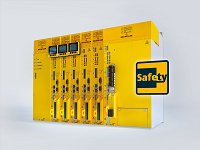 One typical area of application for this function is in the textile industry. If a machine operator moves within the danger zone of a machine, it can automatically start safe monitoring and reduce the speed (SLS).

If the active speed monitoring SLS detects that the set speed limit has been exceeded, the safety module automatically switches on the previously parameterized delay time before triggering the STO function.

The controller receives the signal to remove the needle from the fabric within this time before STO is executed and the drive is switched torque-free. This functionality can, for example, prevent needle breakage or an error in the embroidery pattern and allow production to resume swiftly.

Fig. 1: The parameterizable delay time (SS1 time) can be used to prevent machine damage and production losses. The safety function is integrated in the new SAF 002/003 safety modules from Baumüller

Fig. 2: The parameterizable delay time is a time window, individually user-programmable depending on the safety function, which is switched between the safety functions and the STO function. Now available for all SAF 002/003 safety modules of the b maXX 5000 converter series

It seems that the phrase new normal is coming back. I admit, that I almost forgot about it, since has been a dozen years since I heard it for the first time. Journalists, economists, bankers, politicians and others start to use it between 2007 and 2008 in the tine of the financial crisis then, which was followed by the global recession. Then came a bull’s trend on the stock markets, indexes grow, as well as profits in companies and we all practically forgot the crisis. Now it back and with it the term new normal. What actually does this means?